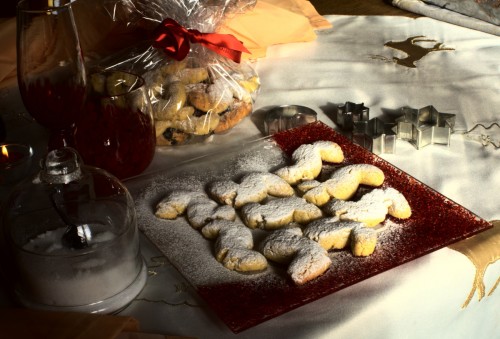 2015 is coming to an end and we would like to offer you another Italian cookies recipe from Venice to try out for the New Year!

We would like to thank our sponsors Abate Zanetti and U-Cook Italia for all their support in the last few months!

For our Back To Venetian Basic series, here we are with Bissette Degli Ebrei, the S shaped cookies you can spot everywhere around the city.

The Venetian territory, throughout its history, has often been a crossroads of different cultures and traditions. Through the trade that Venice held with the East and the frequent contacts with the peoples and countries of the Mediterranean, but especially thanks to the imagination and skill of the Venetian people, who were able to build on this diversity, Venetian cuisine has gradually enriched itself with exotic ingredients, such as spices and herbs, as well as cooking and storing techniques which were previously unknown, such as rice cooking methods, salting, pickling and preserving. 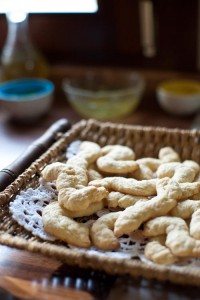 Writing of Venetian cuisine inevitably leads to talking about Jewish cuisine. The Jewish gastronomic tradition is generally very rich and changes from region to region, reflecting the typical local particularity of Italy.

In such a panorama, Venetian-Jewish cuisine is perhaps one of the richest, thanks to the cosmopolitan character that has always characterized the community which lived here and the Republic which hosted it. Aromas and flavors which came from far away, but that were close to us, a fusion of cultures, spices and traditions. These are the ingredients of the Jewish Venetian Cuisine. Traditional Jewish-Venetian recipes that have beenÂ handed down for centuriesÂ and have been brought here in Venice by the various “nations”, the Sephardi, the Ashkenazim and the Italian, from the 15th century onwards.

Not surprisingly many Venetian “symbol” dishes all stem from the Levantine or Ashkenazim culinary traditions, Mediterranean the first, more “Nordic” the second. See, for example, one of the most typical Venetian (but of Jewish origin) dishes like Bigoi in Salsa ( a large dark spaghetti type pasta dressed with a sauce of onions and sardines preserved in salt). 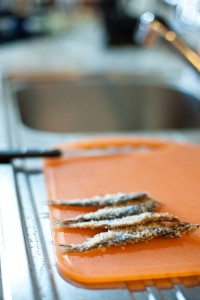 The Levantine and Ashkenazim gastronomic traditions draw nourishment and inspiration from the large availability of spices that Venice could get through its commercial traffic and the creation of private vegetable gardens in the ghetto, just like in all the Venetian islands, suited to this practice (S.Erasmo San Francesco della Vigna, Le Vignole, Mazzorbo).

A small vegetable garden behind the Levantine synagogue is still active, another one existed behind the Spanish Synagogue and was cultivated as an orchard (figs and pomegranates) and as a vineyard. Other gardens, now lost, live only in the memories of the city, thanks to the “nizioleti” (literally “bed sheets”), small rectangle signs painted on the walls of the calli (alleyways), the campi( square) and the fondamente (canal banks). See for example Calle dell’Orto and Campiello dell’Orto near the Old Ghetto.

The vivacity and prestige of the community has influenced over time some aspects of the city life, especially the cuisine: “mangiare all’ebrea” (eating like a Jew) meant to eat food which was cooked in a wise and skillful way (for example all goose based charcuterie, the quince, the fish and the vegetables, like the aubergine). So much so that the ghetto was also eventually frequented by Christians who loved to purchase and taste “gourmet” dishes – “mangiare all’ebrea” meant becoming Jewish for a moment, it meant traveling abroad walking along only a few hundred meters. 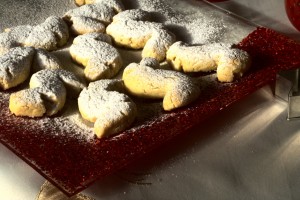 The name Bissette comes from the common Venetian word bissa/biscia meaning grass snake, since the cookies have the typical shape in the form of an esse.

The S cookies are very frequent in Venice. There are the Burano esses which are quite friable and are perfect dipped in sweet wine and then there are the Bissette degli Ebrei, typical treats of Passover (Pesach), but which are now consumed 12 months a year and which have a harder consistency and should be served with zabaglione.

The Jewish Esses are nice and crumbly, but not as much as the “buranei”, which contain a large quantity of butter and eggs.

The same dough of the bisse, prepared with less oil and eggs, is used to make other cakes: zuccherini (little flat donut shaped hard cookies with one of the surfaces covered in granulated sugar) and also the impade, another hard cookie containing almonds and sugar mixed together. These are all unleavened sweets, of Sephardic origin, which are eaten during Pesach (Passover), the feast commemorating the release of the Jews from Egypt.

Together with the matzo, the Bisse were baked in the Matzoh oven which was used only for Passover. The baker started working at least a month before the festival (which lasts 8 days) and produced unleavened cakes not only for the community of Venice, but also for the other communities in Italy.

The recipe we used is taken from the book by Maria Agostini “Dolci Ebraici della tradizione veneziana” by Filippi Editore which can be purchased in the Museum of the Ghetto in Venice.

We also have our own version which replaces the oil with butter and which we report after the original recipe. Both recipes and many more are taught during our Venetian Home Cooking Classes in Venice! Book Now! 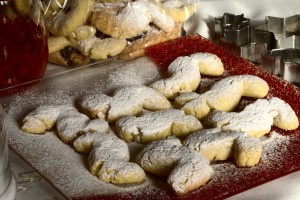 grated zest of a lemon 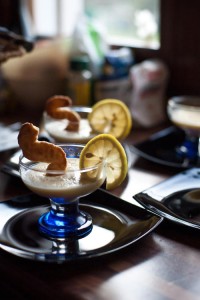 a small glass of limoncello