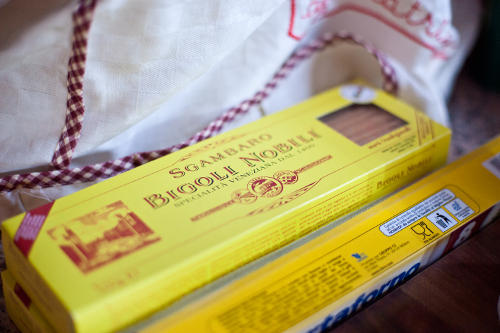 Published on January 9, 2013 | in First courses By Monica Cesarato |2 Comments 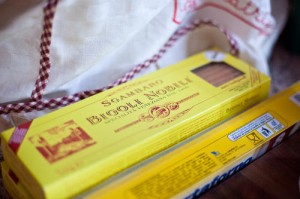 Pasta Bigoli: some people think that the name of â€œbigoliâ€ comes from the curved rod with two hooks at the end, which was used to transport, resting it on the shoulders, buckets of water or milk crates, and that it was also a unit of measure (bi = two and angle = neck).

There also those who believe that the name derives from the verb â€œbighellonareâ€ (loitering), which in Venetian dialect means, in its origin, going out to party.

All over Veneto the bigoli were the most common dish eaten during the days of abstinence and fasting: Christmas Eve, Ash Wednesday and Holy Friday were and are always the days of “bigoli in salsa” in almost all the cities of Veneto with a constant combination of bigoli and salted sardines, with the added variation of other ingredients from city to city.

If their name has already unsure birth, you can imagine the problem with their origins. It is said that during the war the Republic of Venice fought against the Turks, and the latter used to sink the merchant vessels sailing from Sicily to Venice and Â bringing durum wheat which was used to make bread and pasta. The stores were increasingly empty and the risk of starvation loomed. The workerin charge of the city food supplies was a Paduan who thought of using the little durum wheat that remained, and mix it with the tender grain that the Venetian hinterland offered. Everything was mixed with eggs to give more consistency to the product, which was served as a very large noodle. There are traces of this in the historical archives in Reggio Emilia, where a script by the master of culinary art, Barnaba de Reatins describes this product in 1338 and it calls it â€œmenudeiâ€, clearly the ancestor of the current bigoli (pronounced in Venetian bigoi â€“ beegoee).

In 1604 the Paduan Bartolomio Veronese, master pasta maker, called Abbondanza (Abundance) because of his large size, obtained permission from the municipal council of Padua for a patent for a pasta making machine. This machine, constructed in wood, of cylindrical shape, allowed to compress, with a lever and a piston, the dough, inserted from above, by passing it through a perforated filter. The result was a long pasta similar to Neapolitan spaghetti, but much larger (2 to 2.5 mm. In diameter) and pretty coarse on the surface, without a hole in the center. Thus was born the bigolano which then took the name of Bigolaro (the machine that prepares bigoli) which later for safety and hygiene would be built with filters and dies all in bronze. 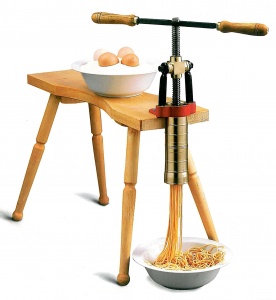 Venetian grandmothers used to make the bigoli with a home-cooking Bigolaro, a press that was fixed to the table: the Nonna would put a bowl on a chair which would be positioned under the Bigolaro and then press the dough with the machine and long spaghetti fell into the basin below.

The use of the Bigolaro is especially famous in the north-est of Italy and was used mostly by low-income families, because they could prepare the very cheap dough but at the same time making it energetic and nutritious, since they could not afford to buy the lasagne, which were very expensive for the presence of the eggs. In the past eggs were used as coins in exchange for goods, so one egg could buy an equivalent measure of one egg of sugar or salt. Eggs were not lacking, since all households had their own small chicken coop, but first of all they had to serve as currency.

The dough was made out of: 500 g of flour, a pinch of salt and enough water to make the dough firm but elastic. Â The Bigolaro was fixed to the table, or if there was another type of machine this would be attached to a stool on which, in general, sat a young girl or the same person who put into operation the Bigolaro.Â As soon as they were made the bigoli were put to dry on top of sticks suspended between two chairs, called in dialect “Perteghe” or “perteghete” depending on the length of the sticks.

In general, the housewives prepared this pasta once a week and enough to last for the whole week, so the amount of dough produced was considerable, not forgetting the number of members of the family, which in those days were often numerous. 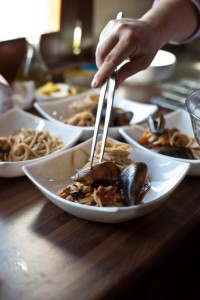 Bigoli in salsa and Bigoli with mussels by Rocco Paladino

After WWII people started getting wealthier and the press went into disuse due to the commercialization of new dry pasta products. The dark bigoli of Bassano and Treviso went through a difficult period then because, under Italian law, which caters for the official production of pasta allowing only the use of durum wheat for the production, they appeared to be a sophisticated altered product. Fortunately laws change and now, being classified as a traditional product, they can be produced according to the original recipe.Â By adding squid ink you also get black bigoli.

Here below is the traditional recipe for Bigoli in Salsa, the most famous of all Venetian pasta dishes. Â Easy, cheap and simply DELICIOUS! And remember, book your cooking class in Venice now and learn how to prepare this dish with us!

FinelyÂ dice the onion. Place a spoon of olive oil in a saucepan over a low heat and place the onion in it.Â Fry very very gentlyÂ and keep adding a spoon or two of wine to avoid the browning of the onion.Â Rinse the sardinesÂ under cold running water, take the bones and innards off and cut the sardines in very small pieces. As soon as the onion is nice and soft but still white add the sardines and keep cooking for a little longer until it become a very thick paste. 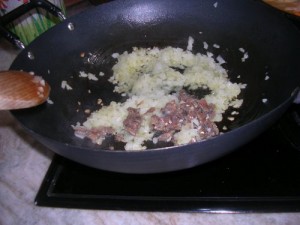 Onions and sardines for Bigoli in Salsa

In the meantime bring a pan full of salted water to the boil. As soon as the water boils, drop the bigoli or spaghetti in it. Cook al dente and drain. Place theÂ bigoli back on the panÂ where you cooked them and mix them with the prepared sardine sauce and gently cook for 1 minute longer. Serve immediately! BUON APPETITO!