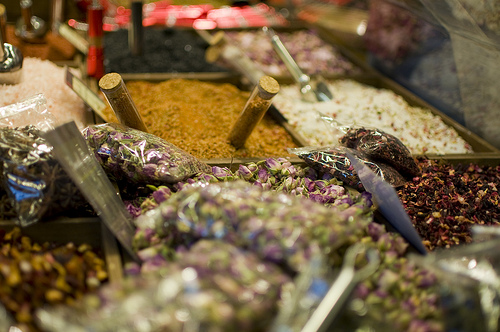 Spices and the importance in Venetian cuisine

Published on January 11, 2013 | in First courses By Monica Cesarato |4 Comments 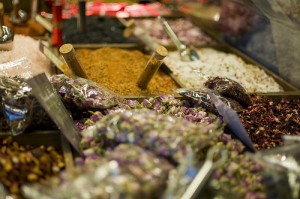 Venetian spices by 1/a

Spices and the importance in Venetian cuisine

Veneto is the second Italian region, after Emilia Romagna, for the number of certified food products: as many as 21 Dop and Igp are from one of the seven provinces of the Veneto.

A natural predisposition to quality is also reflected in the culinary tradition, enriched over the centuries by ingredients from the four corners of the world, thanks to the commercial role of the Venetian Republic, the main point of exchange between Europe and the Far East. Venice was the Emporium of European spices.

Spices had a prominent role in regional cuisine: they were, as well as an effective “preservative” for a large number of foods, also a precious ingredient capable of enhancing simple food.

The function of Venice to the opening of Europe’s gastronomic culture was really important: the contact of the Serenissima with the cultures that faced the Mediterranean – Africa and Asia – was an important vehicle for the import of spices throughout Europe. In the fifth century Venice unloaded from the ships coming from the Levantine countries about 5000 tons of spices, such as pepper, ginger, saffron, cinnamon, nutmeg, mace, cloves, coriander, and others.

The first to mention the important role of Venice was the Latin writer and diplomat Flavius Cassiodorus, in the trade mission to the newly born community in 537 AD, who described the eating habits based on “only fish.” The Venetic sold salt for a living. In 1000, after developing the maritime trade with the East with the Crusades, Venice became a kind of “global bazaar” where merchants from all over Europe came to buy pepper, cinnamon, saffron, sugar, cloves and other flavors which rich men seemed eager to use to season the tasteless meat. The Venetian fleet with its “cocche” (bulging ships) sent loads of people and animals (120 men and 30 horses) over to the land of the Crusades and brought home their holds full of merchandise like spices, silks, brocades, pearls, perfumes. Products such as â€œfood drugs” (as they were known) were hard to find and their consumption or exhibition became a kind of status symbol. In those years the “sacchettis Venetis” ( Venetian bags) were very famous â€“ they consisted of a mixture of fragrant spices and they were sold by the â€œspezieriâ€. They were bought by Venetian merchants at very high prices and were left in heritage together with the family jewels.

The various ethnic groups that made up the population of Venice left a definite mark in the refined and detailed cooking of the Serenissima. Venice welcomed ingredients and food components of the civilization with which it traded and it reworked them in its own way, spreading them everywhere: rice with raisins, gnocchi with breadcrumbs, goose salami and ears of Ammon, a kind of galani folded on themselves and also the combination of rice with vegetables, which comes from the mixture of various cuisines, such as the Jewish. The Armenians left us a particular dish: rice cooked in milk, sprinkled with cinnamon and sugar. 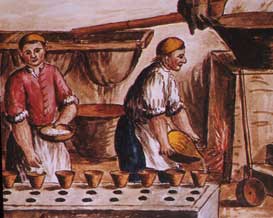 And sugar itself was spread from Venice across Europe. Around the year 1000 the Templars Knights imported it from Cyprus and Crete, increasing the production in the Veneto hinterland, so much so that, little by little, honey was replaced by this sweet element. At the beginning it was only used for pharmaceutical reasons: from this period the use of the candy and the tablet, which were given only to important people.

As time went by the production of this sweet and wonderful element became the pivot of an art in which Venice touched unbelievable peaks: famous and elaborate sugar sculptures were performed not only by skilled confectioners, but the decorations were treated by important artists such as Sansovino and also Canova. Famous was the ” surprise demonstration” in 1574 to a young Henry, heir to the French throne and son of Catherine de Medici â€“ at that time the court of France was one of the finest and most representative in Europe. In the Great Council Hall of the Doge’s Palace a banquet was all set up and everything was made out of sugar, from the tablecloths to the ornaments and the statues that adorned the room, and the famous Sansovino participated to the preparation with his sketches, together with the famous and fantastic Venetian scaletÃ¨ri, amazing confectioners. Their work so amazing and all the furnishings, the tablecloth and even the napkins looked so real that the prince sat down at the table convinced to start the banquet,,,, and realized that it was all made with sugar when the napkin crumbled in his hands! 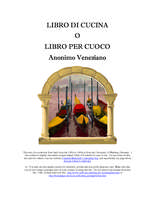 Here is a very old recipe from Anonimo Veneziano (a Venetian cookbook from the 1300s to 1400s, now at the University of Marburg, Germany ) using spices.

if you want to make a strong sauce, take cloves, cinnamon, ginger, a little cardamom and hazelnuts, cooked on hot coalsÂ so you can peel them, a little bit of the inside of the bread and sugar. Pound all these things together for a little bit and add some vinegar. This is a good sauce for all roasts.