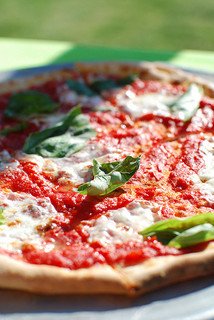 Published on February 1, 2013 | in Main courses By Monica Cesarato |2 Comments 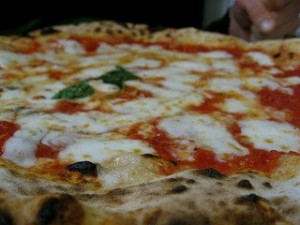 Pizza: all about it

Raised, Neapolitan style, or flat, Roman style. Simple, with tomato and oregano, or overloaded with ingredients, from eggs to ham, from vegetables to seafood. Cooked in a traditional wood oven or in the oven at home. In slices or round, to take away or eaten in old historical places with paper tablecloths. Italian par excellence. So much so that it kept its name in the world with no translation. From America to Japan, there is only one way to say it: Pizza.

Pizza is definitely one of the most loved dishes, not only in Italy, but all over the world. Pizza is a delicacy that has its basis in a mixture of water, flour and yeast, worked up to get a flat shape, baked and seasoned with different various ingredients.

Although pizza is considered a “modern” food because nowadays it is consumed at such large extent, its origins sink the roots in the mists of time. 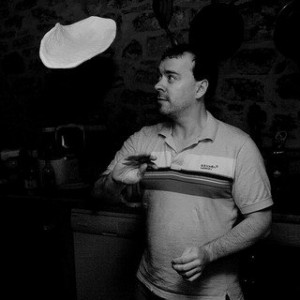 The history of pizza began when primitive men learned to extract flour from wheat, as a kind of rough flour, made by crushing the beans, mix it with water to get a loaf and bake it on the fire. The true origin of pizza is still very uncertain: as well as Naples, other cities claim its paternity but the first written records of the word “pizza” dates back to the vulgar Latin of Gaeta in 997.

Even in antiquity, however, flat breads, leavened or not, were used by the Egyptians, the Greeks and the Romans. The etymology of the name “pizza” seems to go back to the Latin verb “pinsere“, meaning crushing or from the Greek word â€œpitaâ€. Pizza is a kind of bread and it comes in countless variations and derivations, changing name and characteristics according to different traditions. In particular, in some areas of Central Italy, it is called “pizza” any kind of baked cake, sweet or savory, tall or flat.

It seems certain, however, that the word “pizza” comes from Naples. Pizza was born by the inspiration of Naples, when they decided they wanted to make their flat bread more tasteful, adding garlic, lard and salt, or, in the most “rich” version, cheese and basil. But the real breakthrough came with the introduction in Europe of the tomato, which is essential in modern pizza. 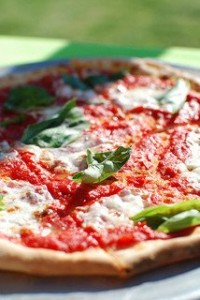 Imported from Peru in Europe by the Spanish colonizers after the discovery of America, the tomato was first used in cooking as a sauce cooked with salt and basil and only later the Neapolitans used it to fill their bread making it more tasty. The history of pizza as we know it, began in the second half of 1800 with the birth of the classic pizza “tomato and mozzarella” that immediately became famous, not only in the Neapolitan capital, but also in America thanks to the multitude of Italian emigrants. The moment of greatest splendor for the pizza was in 1889 on the occasion of the visit in Naples of the then rulers of Italy, King Umberto I and Queen Margherita.

Legend has it that the best pizza maker in Naples, Raffaele Esposito created for this special event three different type of pizzas: the pizza mastunicola, with lard, cheese and basil, the pizza Marinara with tomato, garlic, olive oil, oregano and the pizza “tomato and mozzarella”, with tomato, olive oil, mozzarella and oregano, whose colors intentionally recalled the Italian flag.Â After tasting all three, the Queen remained entranced by the last one and wanted to praise the pizza maker in writing for what he had created. Grateful, in return he decided to call the pizza as his beloved queen: Margherita.

For many years the pizza was purely a southern food but after the end of World War II and with the thousands of immigrants who moved to the new economic triangle Rome-Milan-Genoa, customs, traditions and gastronomy from southern Italy mingled with those of the North.Â In the period from the 60s onwards, the north became aware of the great potential of pizza and pizzerias started to bloom in all cities and in all regions like Lombardy, Trentino, Veneto and Tuscany, so that over time, there began to be more pizzerias in the north than in the south. The first pizzeria opened in Venice in 1947, just behind Piazza San Marco.

Today, the pizza, the most widely known food, consumed in every country in the world without distinction, and envied by all, has become undoubtedly one of the most famous symbol of Italian cuisine abroad.

Spreading the dough in the form of a disc can be done with the use of the rolling pin or, preferably, by hand turning and pulling the balls of leavened dough on a work surface or with air maneuvers. Specialists of the latter method are the acrobatic pizzaioli.

Some considerations for the choice of the main ingredients: flour shall be to type 00, because it is more workable and the dough is softer and more elastic. The water must have a constant temperature of between 6 and 12 degrees. The secret to a good pizza is the high cooking temperature. 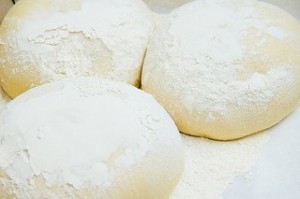 Dissolve half of the water with the salt. Dissolve the other half with the yeast (use two separate containers). Pour half of the flour in the container with salt and water and the other half in the one with the yeast. Mix separately until the two doughs are soft, then mix the two dough until they are well mixed, elastic. Avoid always to put in close contact salt and yeast because the firstÂ prevents the second from performing its raising function.Â Divide the dough in small balls (one for each pizza you wish to make).Â Leave to rest the small balls for 3 hours in a warm place (23 degrees).

Take one of the balls, spread out with your hand to form a disk. Spread with tomato sauce, and leave to rest for 1 hour.Â Cook at 250 degree (maximum temp) for 15 minutes without cheese, then add the mozzarella and all the ingredients you want to add to the pizza. Cook for another 10-15 minutes.

We offer pizza cooking classes, even though it is not a typical Venetian dish, but we love it so much!!!! Just send us an email info@cookinvenice.com and we will send you all the information. or you can book now!Â