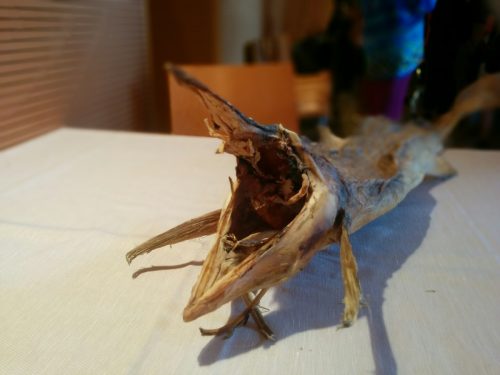 Published on September 4, 2017 | in Main courses, Where to Eat in Venice By Monica Cesarato |1 Comments 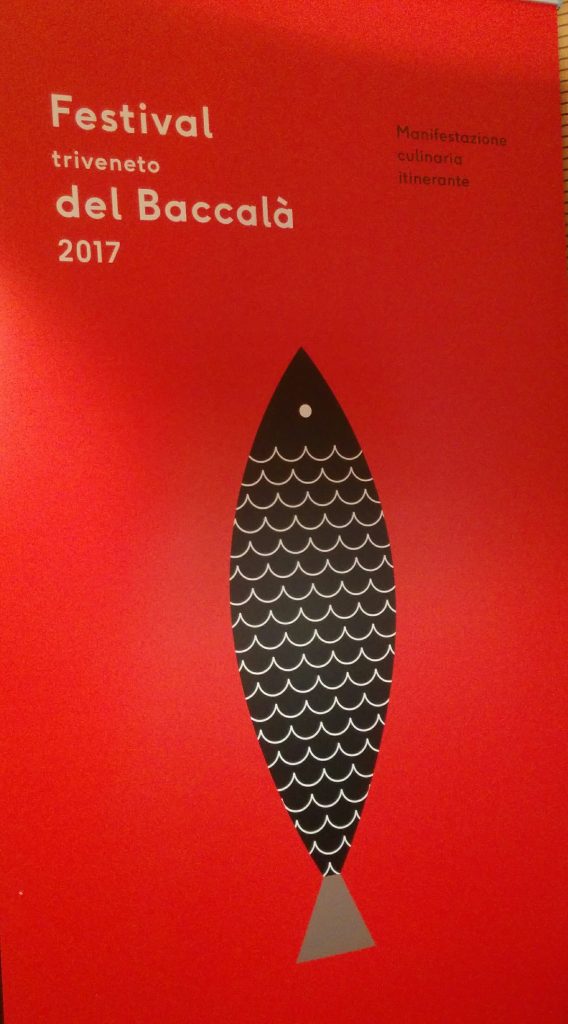 On Friday 1st September I was very lucky to be invited to attend to the Press Conference for the presentation of the 8th Festival Triveneto Del Baccalaâ€™, a very important Italian Food CompetitionÂ which takes place from 3rd September till 4th December 2017 across the three Northern Italian regions of Veneto, Friuli Venezia Giulia and Trentino Alto Adige. 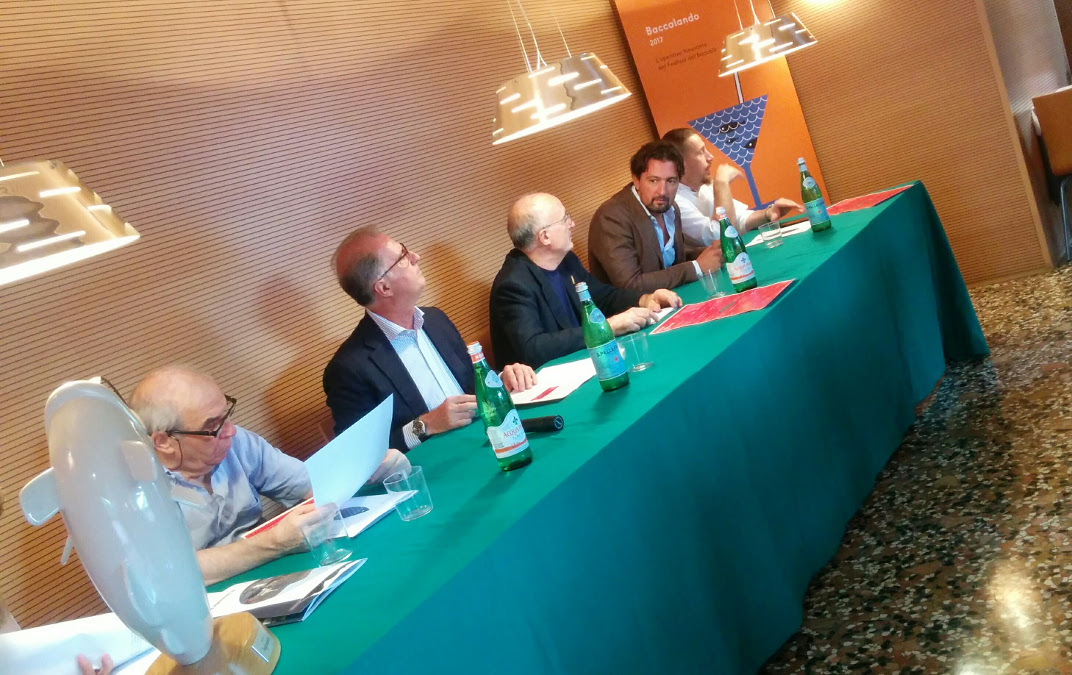 During this very interesting kermesse, 25 restaurants spread across the three regions will fight armed with inventive and original recipes, all using one main focal ingredient: the baccalaâ€™.

This year, the restaurants will have to present two dishes prepared with dry cod, the stockfish from the Lofoten Islands, and one prepared with salt cod. 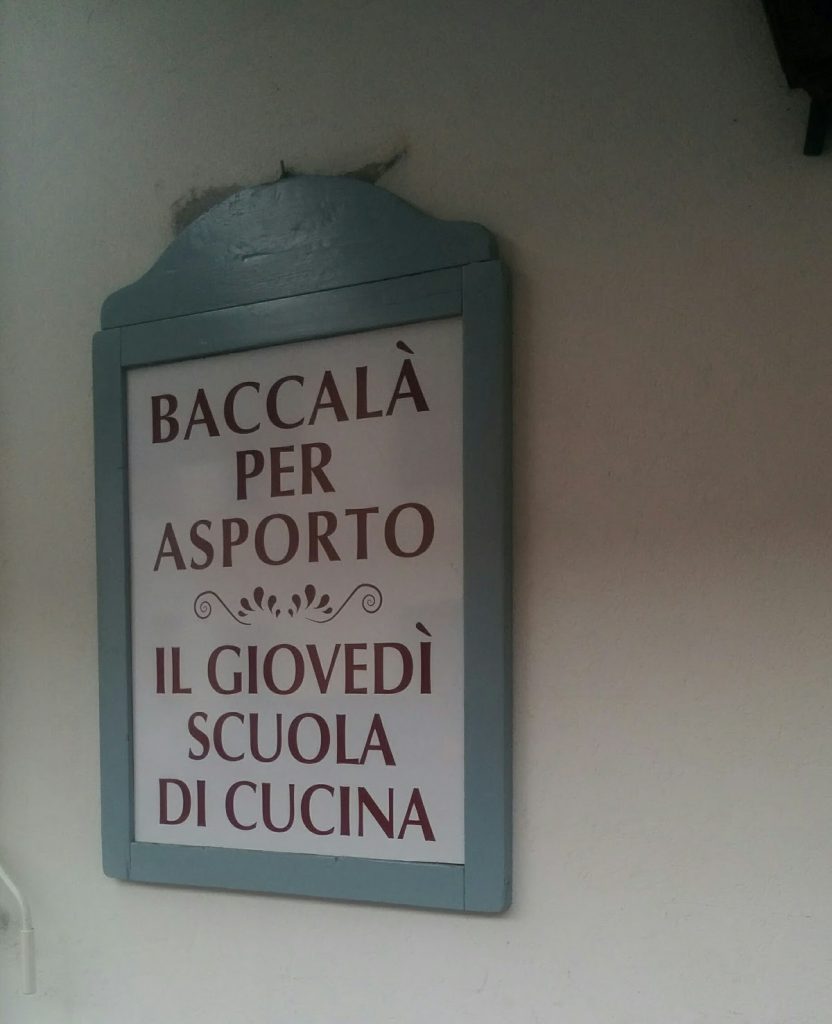 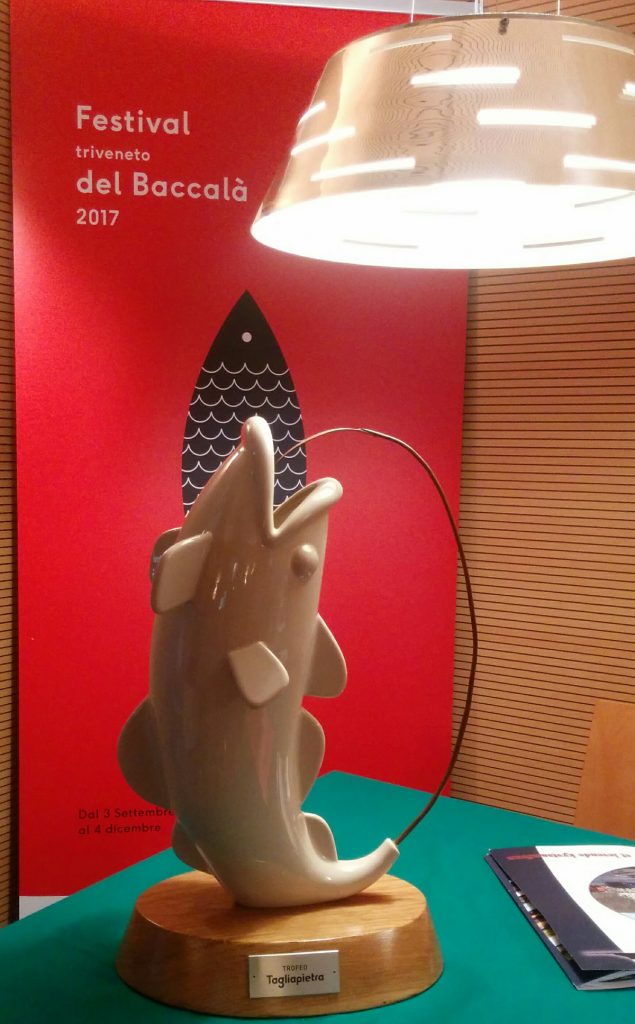 Baccala’: an event only on this!

At the press conference all the organisers were present: Ettore Bonalberti, the Honorary president and creator of the Festival, Luca Padovani, President of the Organising Committee, the famous chef Franco Favaretto of the Baccaladivino restaurant and coordinator of the technical jury, Ermanno Tagliapietra, owner of the company Tagliapietra & Figli Srl, sponsors of the event, Daniele Tagliapietra, managing director of Tagliapietra & Figli Srl, Martino Scarpa, chef from Osteria ai Do Campanili and winner of last year edition, Giovanni e Narciso Bacchin, of Autostazione di Cittadella, the winning bar of last year Baccalando Event (an event which runs alongside the main Festival) and last but not least, the Lord Mayor of Vaeroy,Â  Dagfinn Arntsen, from the Lofoten Island, recently twinned with Venice. 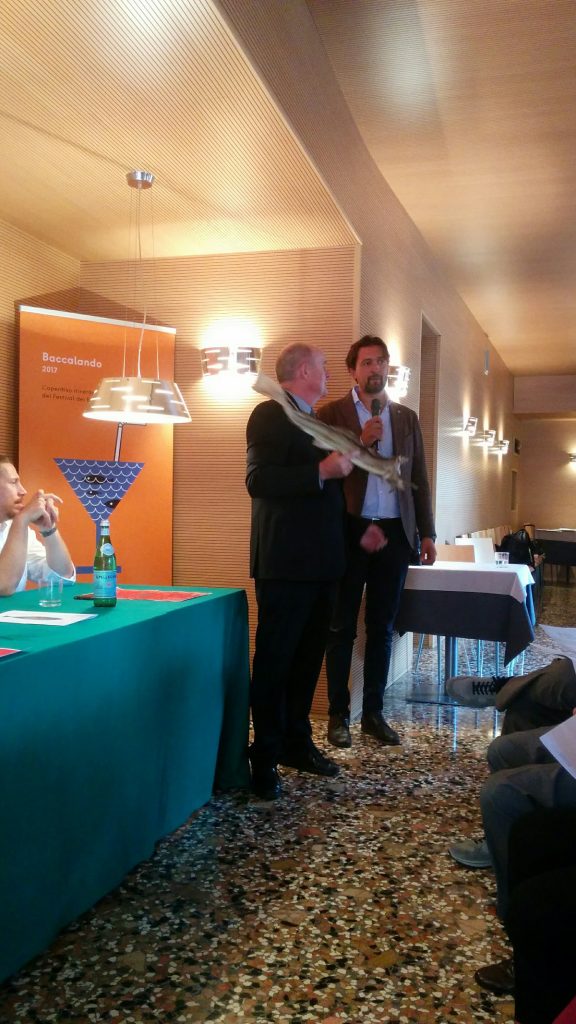 From 3rd September till 20th November people will be able to taste the dishes from the various competing restaurants and cast their vote.Â  Once all votes will be cast, the jury will pick the best recipe for each province and from those a Technical Committee will pick the 6 final recipes, which will compete at the Gran finale on 4th December 2017 at the Cantina Sociale di San Bonifacio. 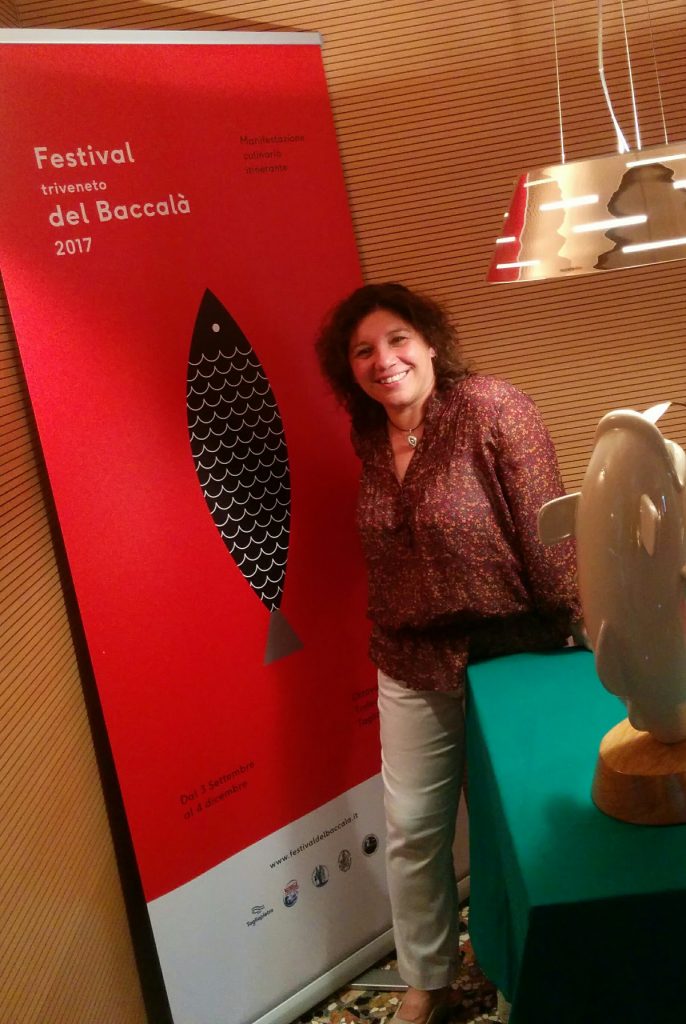 The interesting part of this festival is that the various chefs are not allowed to use recipe from the tradition, but have to be innovative and create brand new recipe using one of the most loved ingredients in North of Italy.

Where Baccala’ comes from!

I was lucky to be able to have a quick chat with Mr Dagfinn Arntsen, the Lord Mayor of Vaeroy. 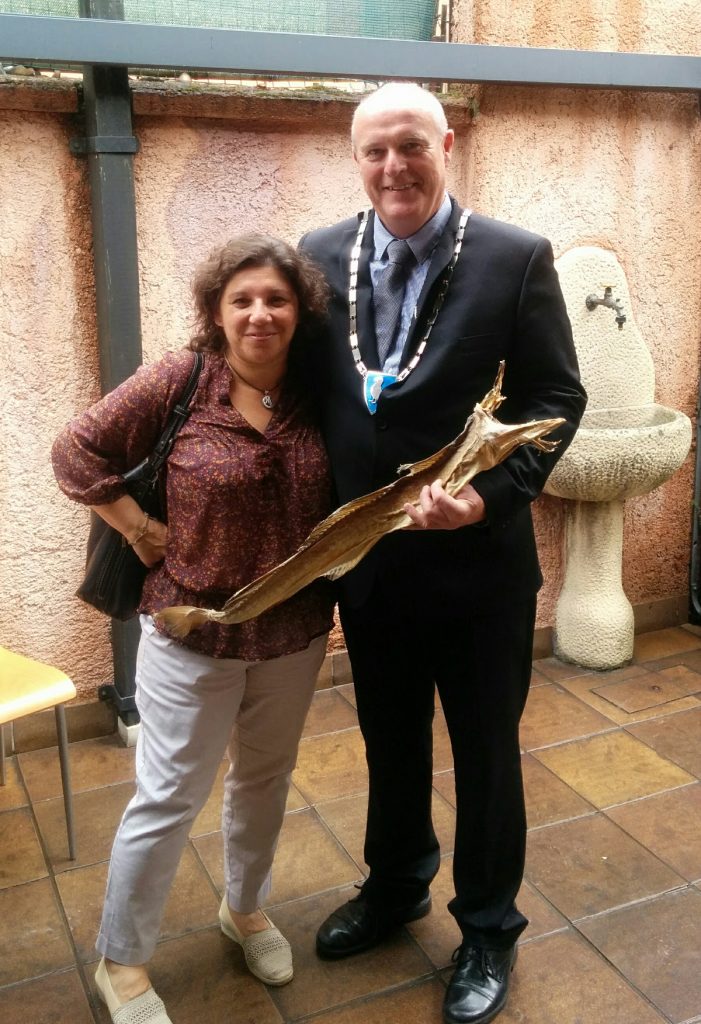 Over a nice glass of Vespaiolo wine and munching away on the various baccala dishes, which Franco Favaretto prepared for the audience of journalist and food bloggers, Mr Arnsten told me, and fellow bloggers Romena Brugnerotto of rominvenice.com and Roberta Zennaro of gamberettarossa.com, some very interesting information about the production of the world famous dry cod, about the islands of Lofoten, about their local Puffin birds and their local puffin dog! 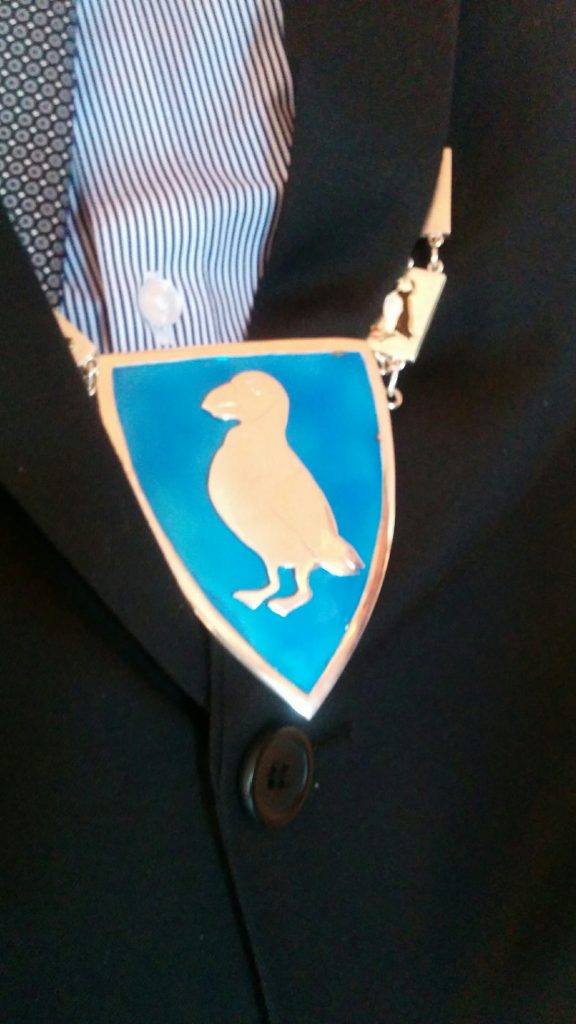 In the Lofoten Archipelago, there are amazing breathtaking landscapes and islands. One of this is VÃ¦rÃ¸y, a place that as well as for its beauty and which strikes also for a climatic particularity.Â

There is no winter here. Although at a remote location, which is north of the Arctic Circle, the temperature never drops below zero. 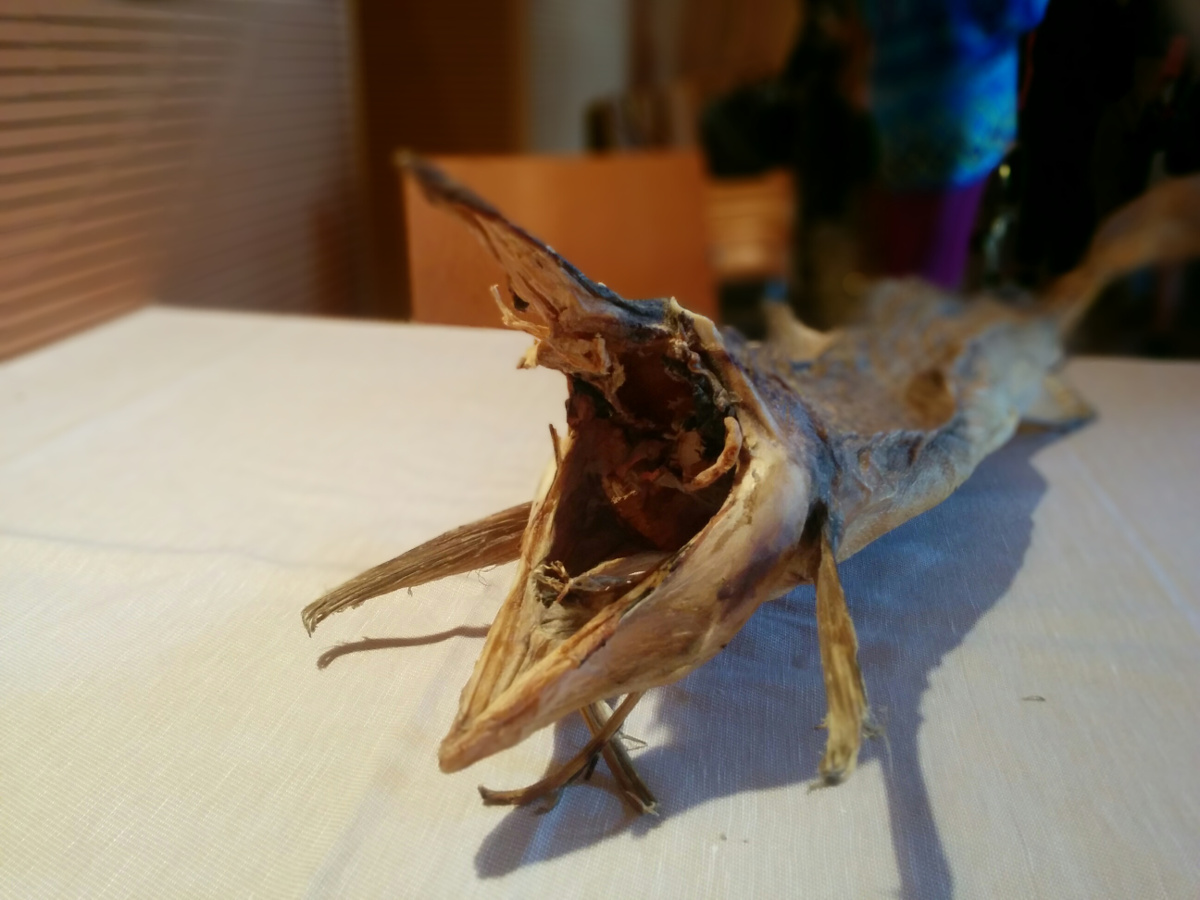 In about 1100, fishing began to play a very important role for the islands and the dried cod was the most important commodity, so much so that it could be exported to all European countries, including Italy, which still imports the majority of stock of Lofoten.

Cod (Gadus morhua), from which the stockfish can be obtained, could be said to have been the engine of trade and discoveries of new lands for many centuries: its flesh, dried up in the fresh winds and saline of the North or salted, not only keeps it for long, but softens it, so it remains tasty and soft, even better than fresh fish. 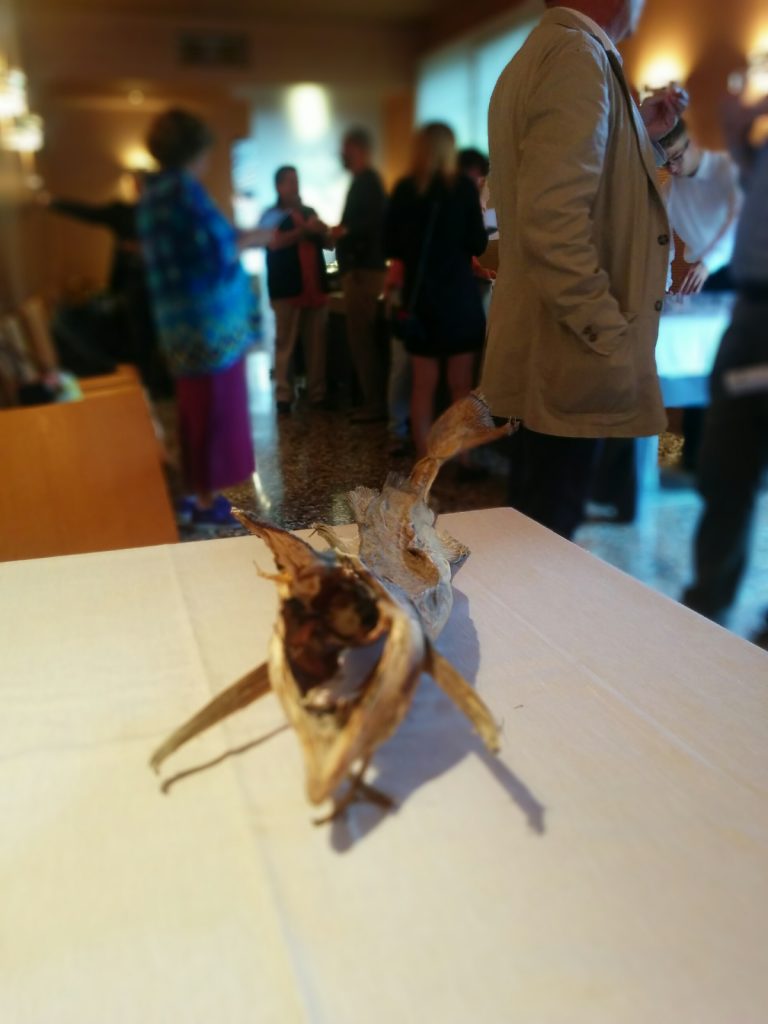 Wars and laws have sanctioned for hundreds of years the fishing areas of the Grand Banks, that is, those schools of fish that were so dense that it would be enough to use bare hands to capture them.

Moreover, Catholicism, which since the Middle Ages imposed not to eat meat on Fridays and for long periods during the year, allowing fish instead, has strengthened the tradition of consuming cod.

In Italy, where it is very used in Veneto, Liguria, Calabria and Sicily (and in some areas like Ancona and Livorno), it seems to have arrived thanks to a shipwreck. The Venetian captain Pietro Querini in 1432 shipwrecked due to a storm in the Channel. The surviving seaman dragged their boats up to the Lofoten where local fishermen welcomed the survivors. It goes without saying that when returning home, Querini could not fail to bring the first stockfish back to Venice and the real importance of Baccalaâ€™ started. 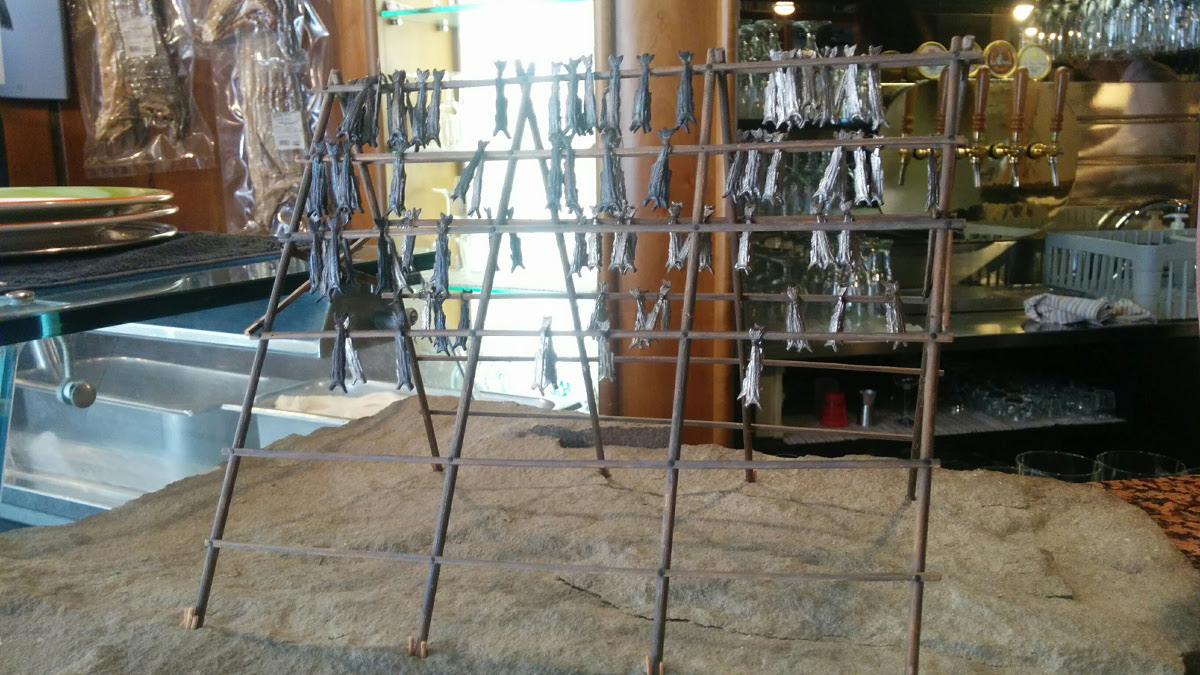 Today, the best quality stockfish is obtained from adult cods that run from February to April off the Lofoten Islands and are dried for about three months in the air of this region of northern Norway. Here the cold wind defends the fish from bacteria and insects, while temperatures around zero and light rain protect its meat. Once detached from the racks it is matured for another two to three months indoors in a dry and aerated environment. 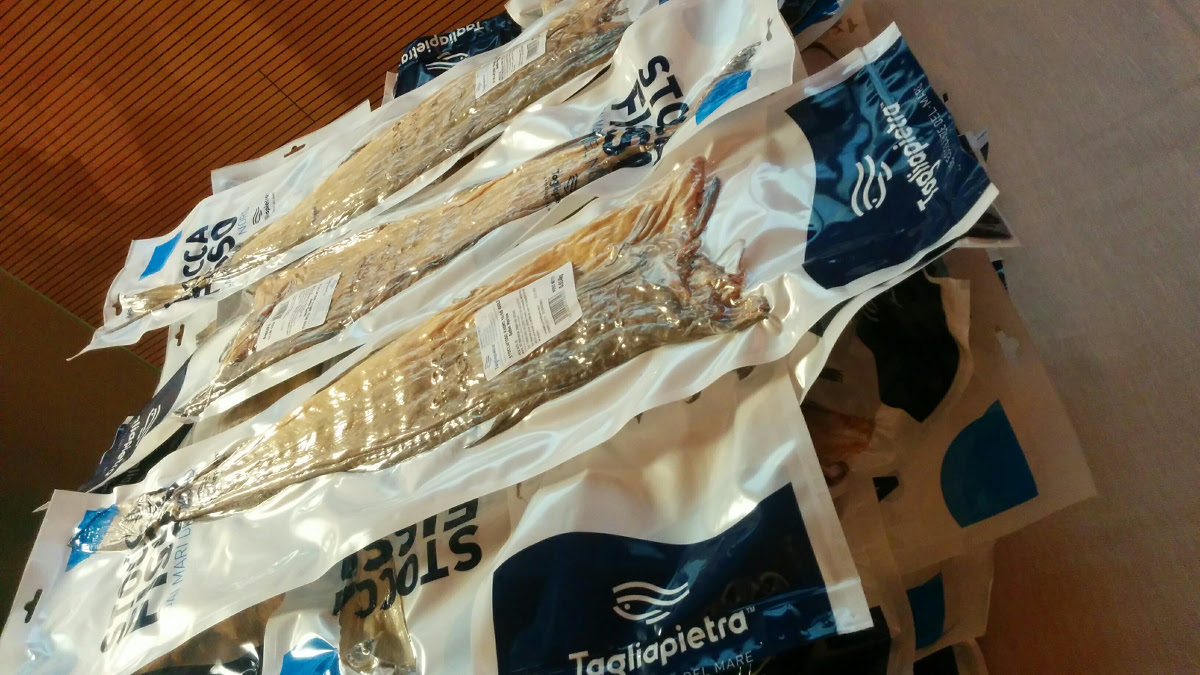 The Norwegians have for centuries considered this fish low in value and sometimes only suitable for animal feed. Today, thanks to the Italian culinary tradition, famous all over the world, which has made the baccala so tasty, there is a real rediscovery of this product. 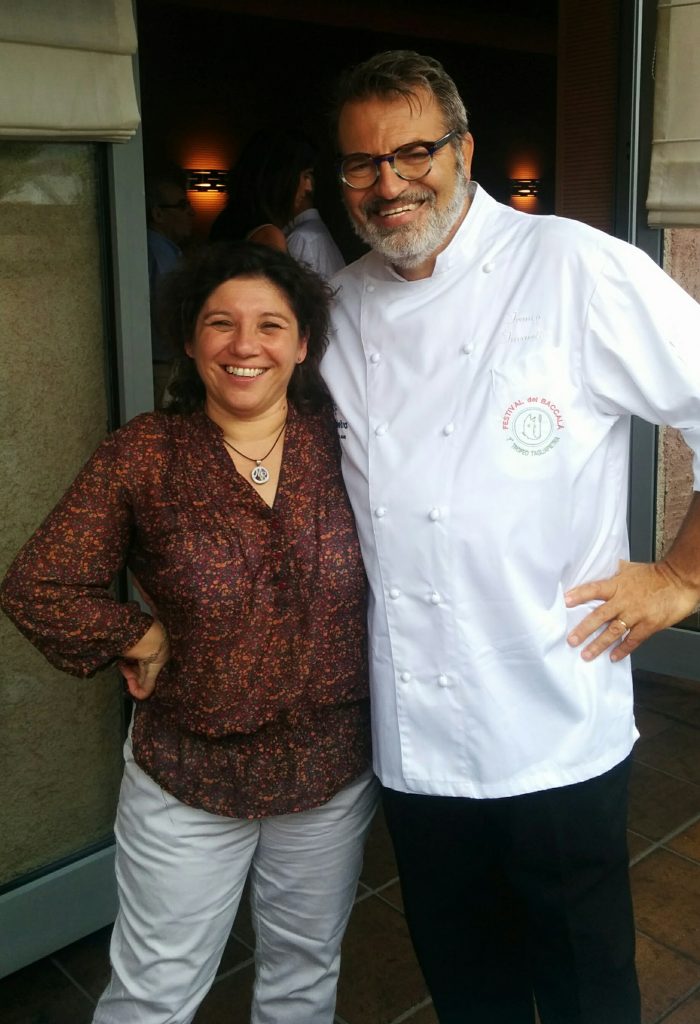 And then we got to eat Baccala’!

The chef Franco Favaretto delighted our palates with a series of cicchetti prepared with the baccala: from the traditional baccala mantecato to his version using herbs and another one with peppers, as well as a dish with chunks of boiled baccala with vegetables and rice or prepared with couscous like the Tunisians do. 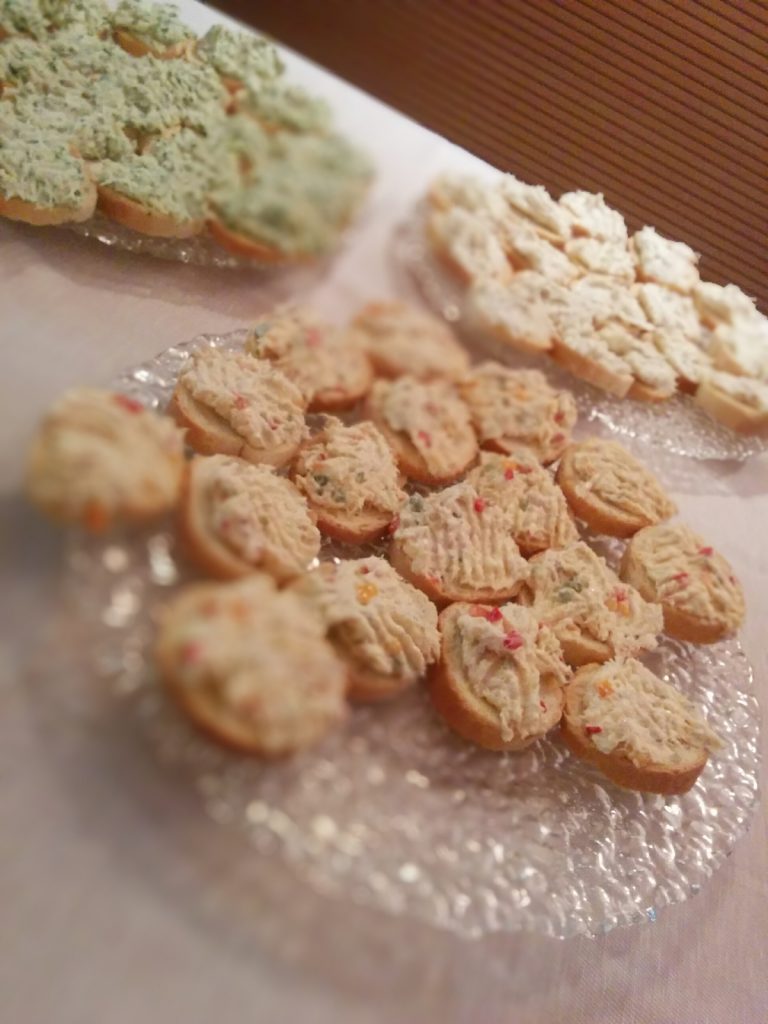 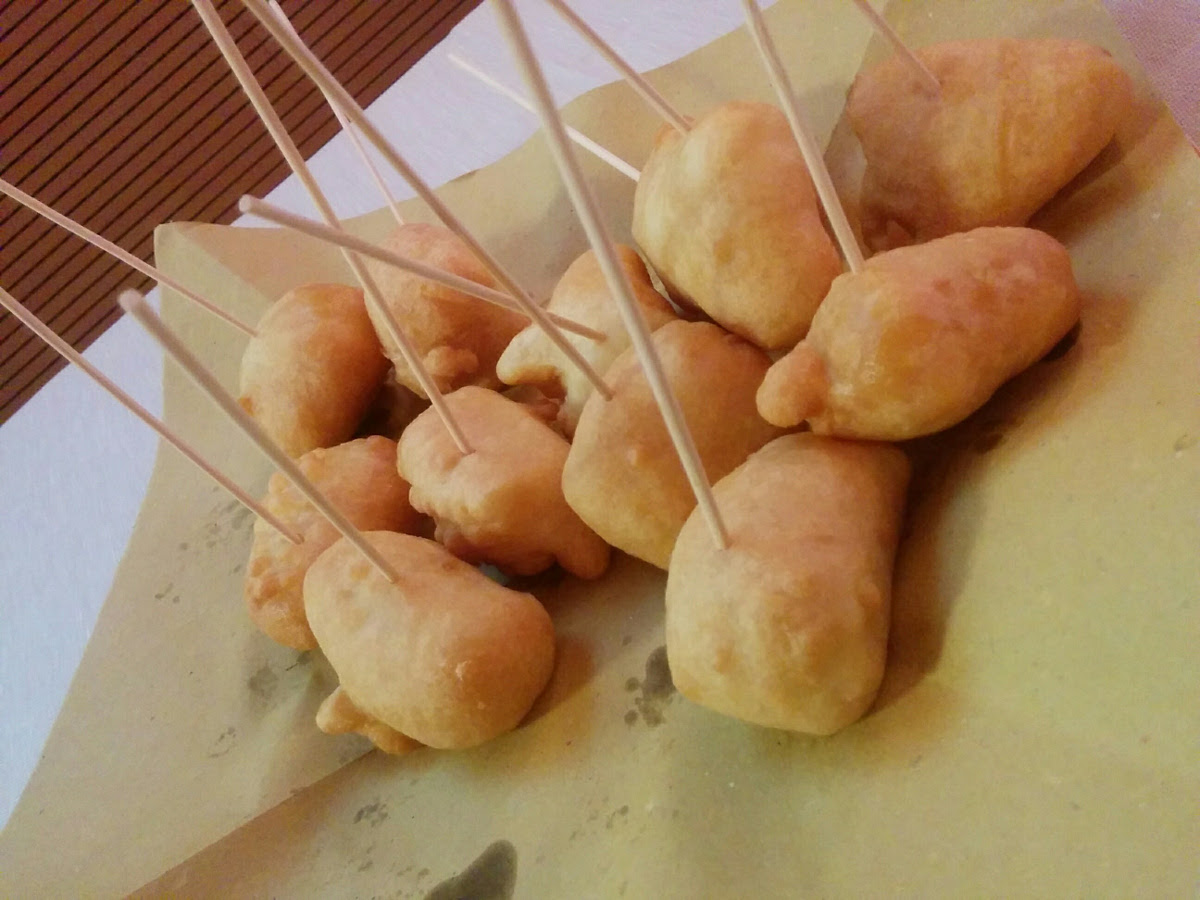 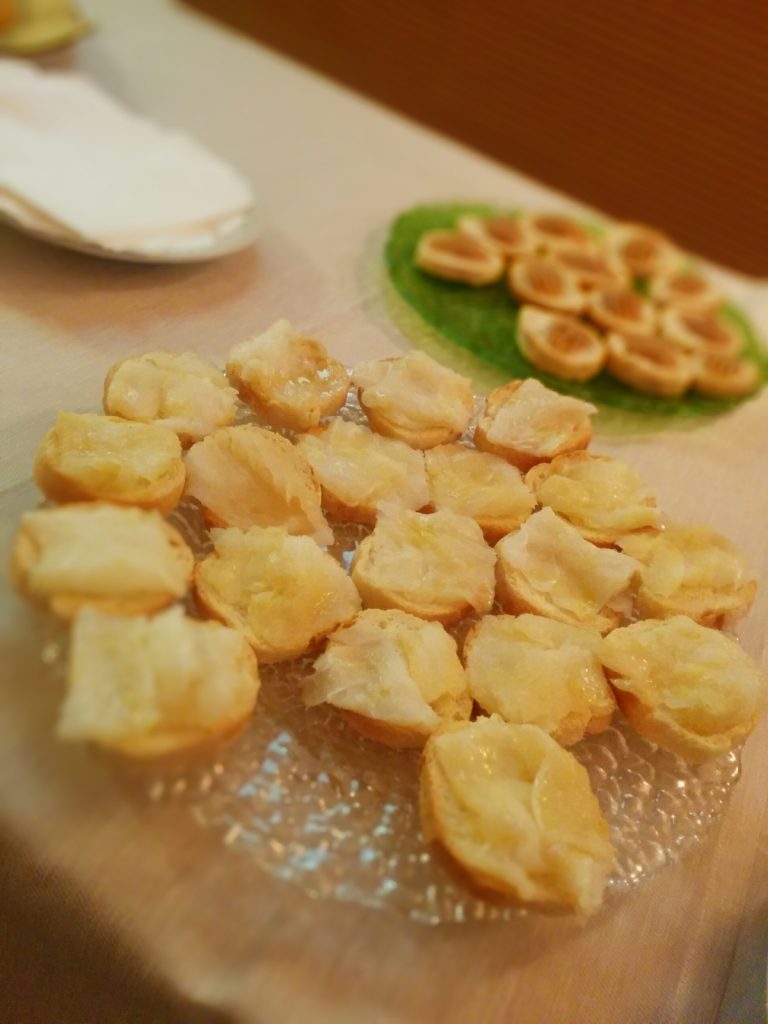 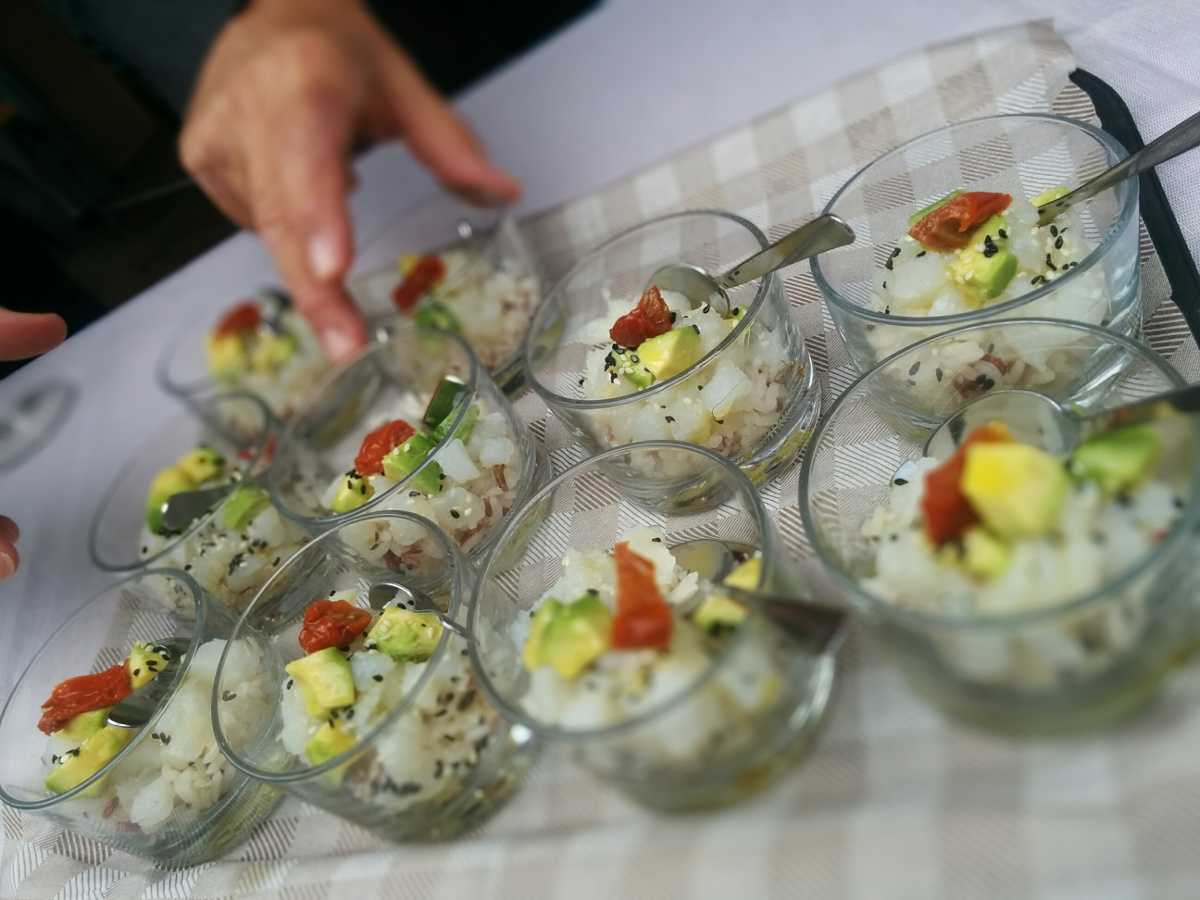 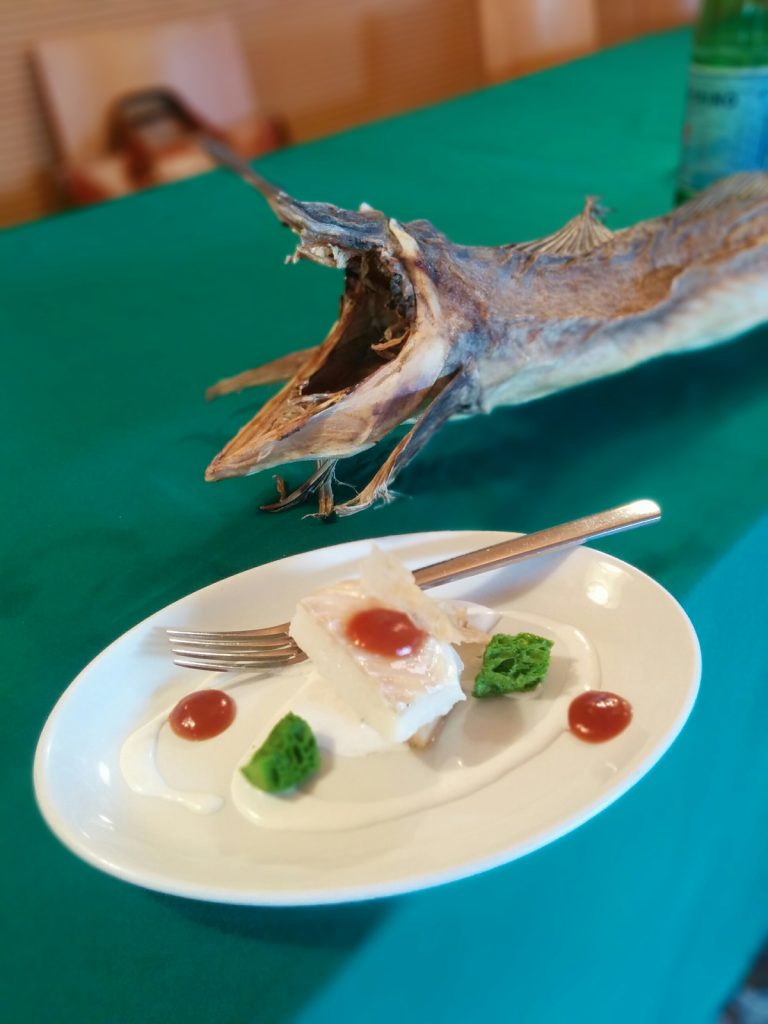