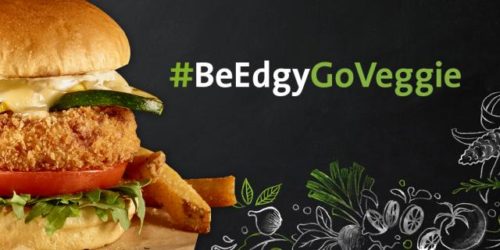 Published on November 8, 2016 | in Where to Eat in Venice By Monica Cesarato | 0 Comments 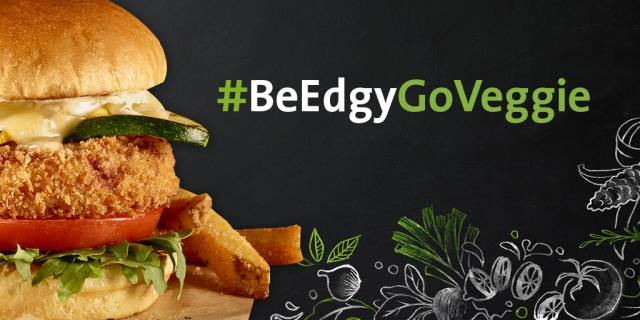 A few weeks ago, as Cook In Venice and as a local Food Blogger, I was asked by Hard Rock CafÃ© in Venice to try out their new range of vegetarian dishes, available for a limited period in their Venetian location.

Pointing out that I am not a vegetarian, but, on the contrary, a quite well convinced carnivore, I was actually intrigued to see how they could spin typically meat based dishes and turn them into something, not only palatable, but also quite appealing to theÂ large international audience, which, most of the time, walks into the Hard Rock CafÃ© to try out real home made burgers, surrounded by celebrity memorabilia and good music. 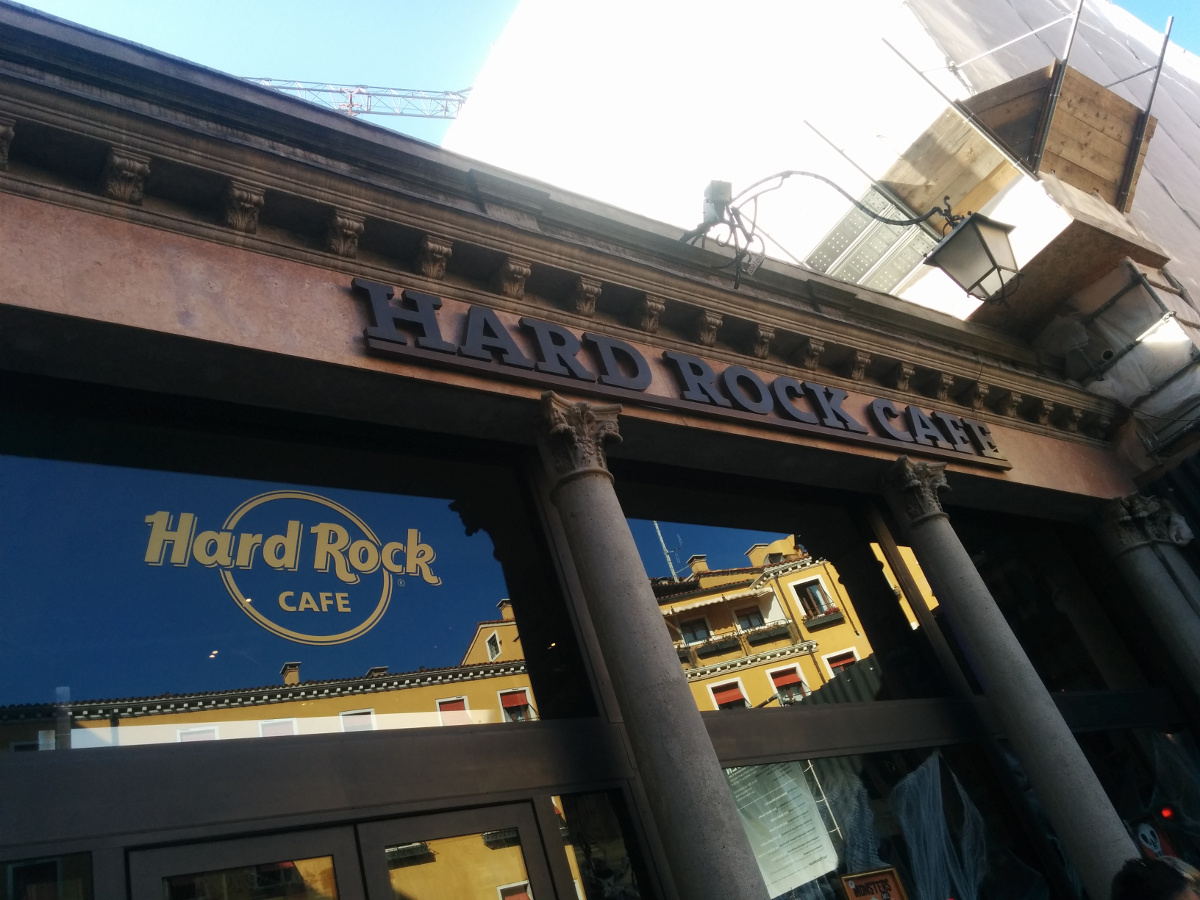 Hard Rock Cafe is a chain of theme restaurants founded in 1971 in London.

The brand later became famous worldwide thanks to the wide dissemination of the Cafes, counting now around 167 sites in 42 countries spread worldwide.

But the real success of the Hard Rock brand is due to the huge collection of about 85,000 memorabilia items, which used to belong to great personalities of the world of music and hosted by each Cafe.

The Hard Rock Cafe is also present in Venice.Â Founded on April 9 2009, it boasts the record of being the smallest in Europe, decorated in Venetian style and placed directly behind the biggest tourist attraction of the city and one of the most famous squares in the world.

The restaurants consists of 400 square meters of space hosting 120 seating, and it is situated in one of the most enviable locations of Venice, just “around the corner” from Saint Marksâ€™ Square and overlooking the Bacino Orseolo, the place where the gondoliers take a breather and rest, awaiting the arrival of the tour clients.

Hard Rock Cafe di Venezia is divided into three sections: as you walk in, downstairs, there is the bar, where you can enjoy delicious cocktails, great Italian wines and even a large selection of soft drinks. Among the exclusive drinks proposed by the Hard Rock Brand, you can try the “keepers”Â (Martini, Hurricane, Shor, or Margarita), served in souvenir glasses, but also a range of classic cocktails. 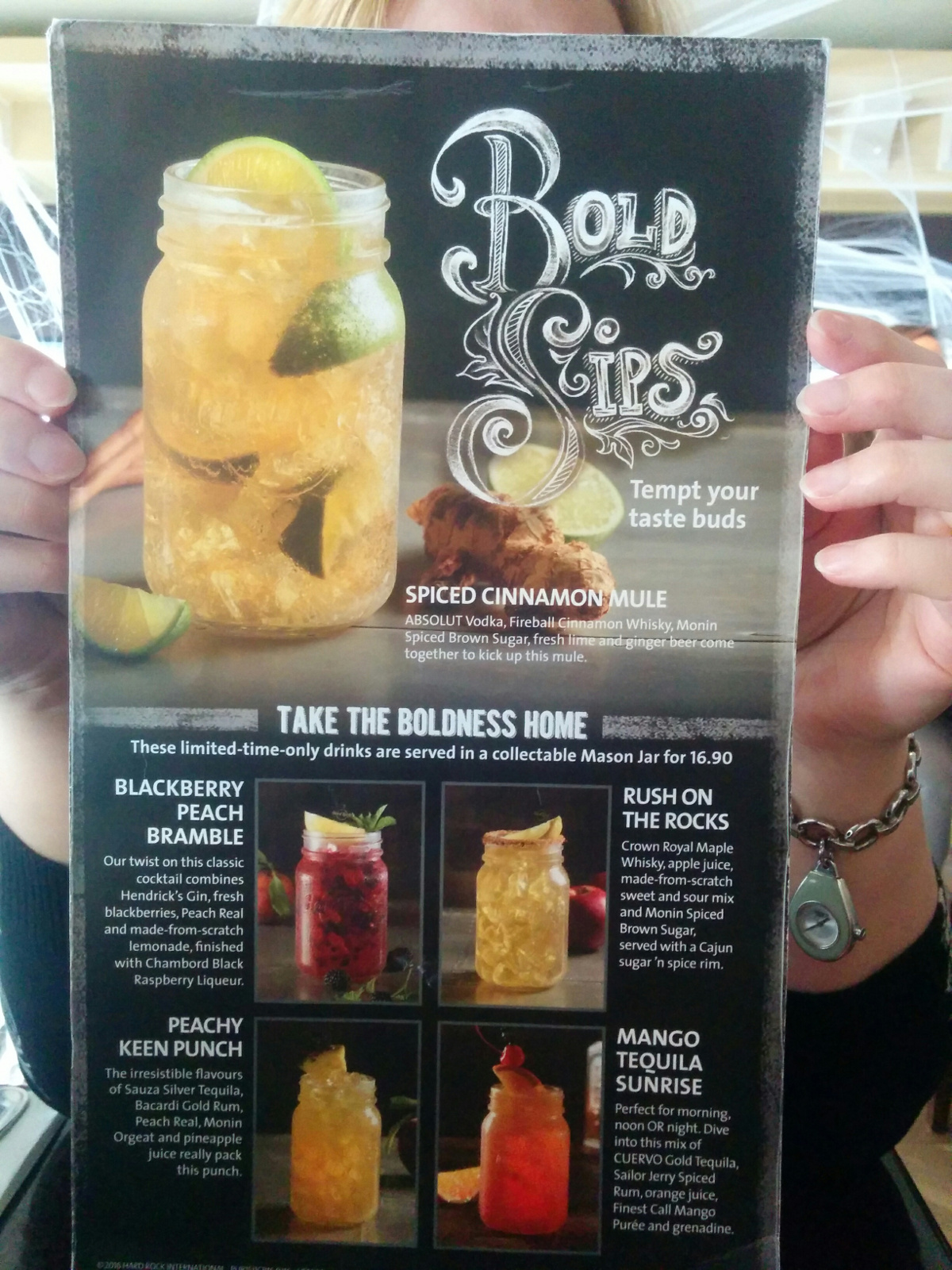 If you prefer a non-alcoholic drink, you can try their delicious and fruity “Alternative Rock” cocktails.

On the ground floor there is also a giftÂ shop where you can buy the brand gadgets, including the classic souvenir t-shirt “Hard Rock Cafe Venice”.

On the first floor, there is the restaurant, with specialties served in the Hard Rock CafÃ© style: classic American cuisine consisting of hamburgers and chips, but with a slight Venetian influence, both in the decor and in the menu, from the typical Murano glassÂ chandelier signed by Venini and the classic Venetian floor, to the typical lagoon fish dishes.

The regular visitors of the Hard Rock Cafes in the world can also find in Venice the atmosphere and the thrill that they usually expect to find in these locations: the right music volume, the well presented food, the smiling and helpful staff, the most exclusive memorabilia of international rock stars and the screens with videos of live concerts.

Among the most important memorabilia in the Venice location, you will be able to spot: Â

My Experience at the Hard Rock CafÃ© in Venice

At the end of October 2016, I strolled into the Hard Rock CafÃ©’s Venetian location with a friend, on one of the busiest days of the year, during the Halloween break. 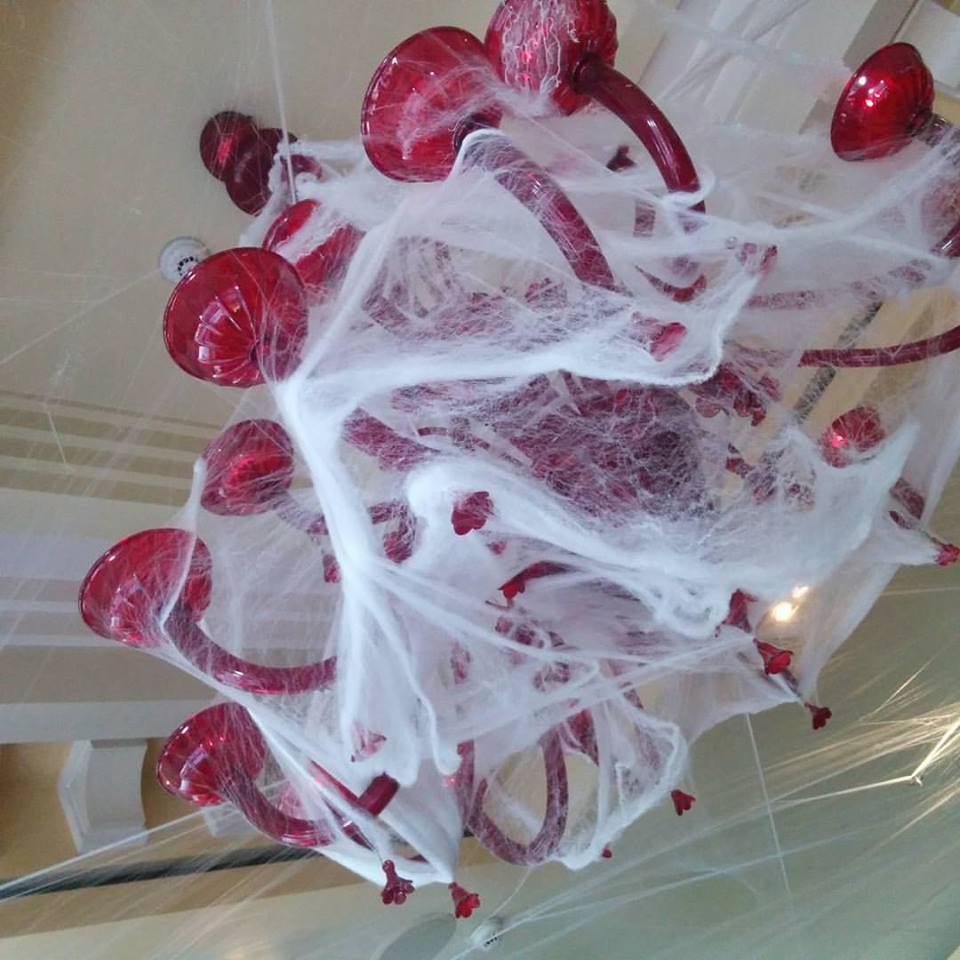 We were immediately welcomed by their very efficient and kind staff (which in Italy is always a plus) and told we would have to wait for a few minutes for a table to be free. We were handed over a beeper (did not even realise they still existed) and we were told to report back at the reception desk once the device buzzed: it meant our table was ready.

We just managed to walk out of the entrance to take a few photos outside and the beeper went off, so we headed back in and were immediately escorted to our table upstairs.

We were lucky to be offered a spot overlooking the Bacino and all the gondoliers passing by.

The place was buzzing with tourists but I also spotted some locals enjoying a drink at the bar: the iconic cafÃ© is also a beacon for the locals.

We were immediately presented the classic menu with the legendary Hard Rock burger and the smoked and grilled dishes but also the new Vegetarian Menu, which I was kindly invited to test by the Hard Rock Cafe. 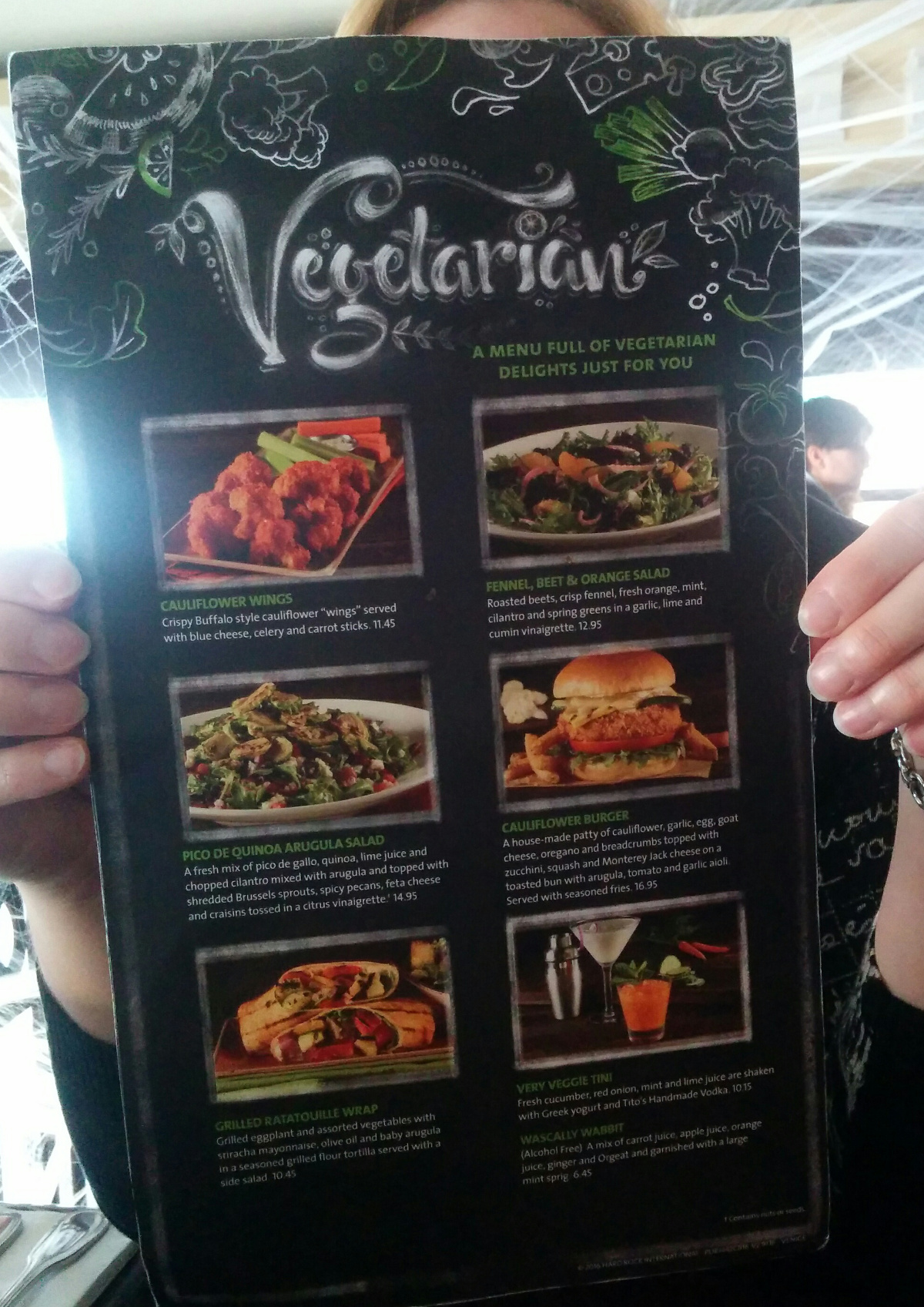 #BeEdgyGoVeggy: The new Vegetarian Experience at the Hard Rock Cafe

In occasion of the Vegetarian Awareness Month, organised by the World Vegetarian Day, the Hard Rock Cafe has launched a veg-friendly version of its menu.

From 3rd October until 13th November 2016 in the Italian Hard Rock Cafes of Rome, Florence and Venice, you will be able to taste a meatless version of the classic menu, most loved by celebrities from around the world.

The new proposals, which are very varied, will be vegetarian and even vegan, on request, to meet all kind of dietary requirements.

The new vegetarian menu of the Hard Rock Cafe also offers some cocktails, easily combined with the various vegetarian options, even in the alcohol free version:

My personal experience at the Hard Rock Cafe in Venice 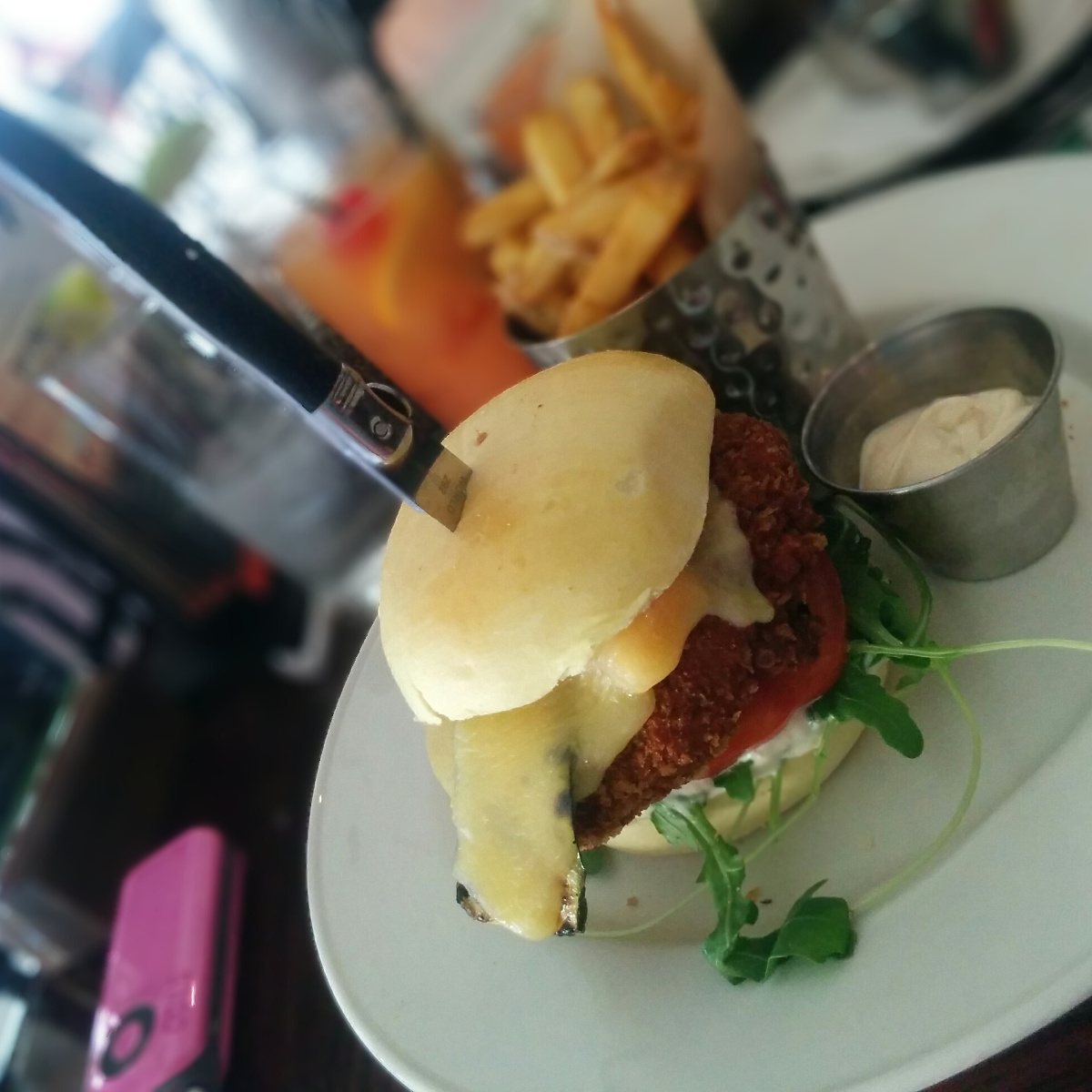 It came with a large portion of homemade fries. For a drink I went for a Mango Tequila Sunrise, a concoction of Tequila, Rum, Grenadine and Mango.

My friend, who suffers from many allergies and intolerances, opted for the Pico de Gallo Quinoa Arugula Salad and for the new Wascally Wabbit, non-alcoholic drink. 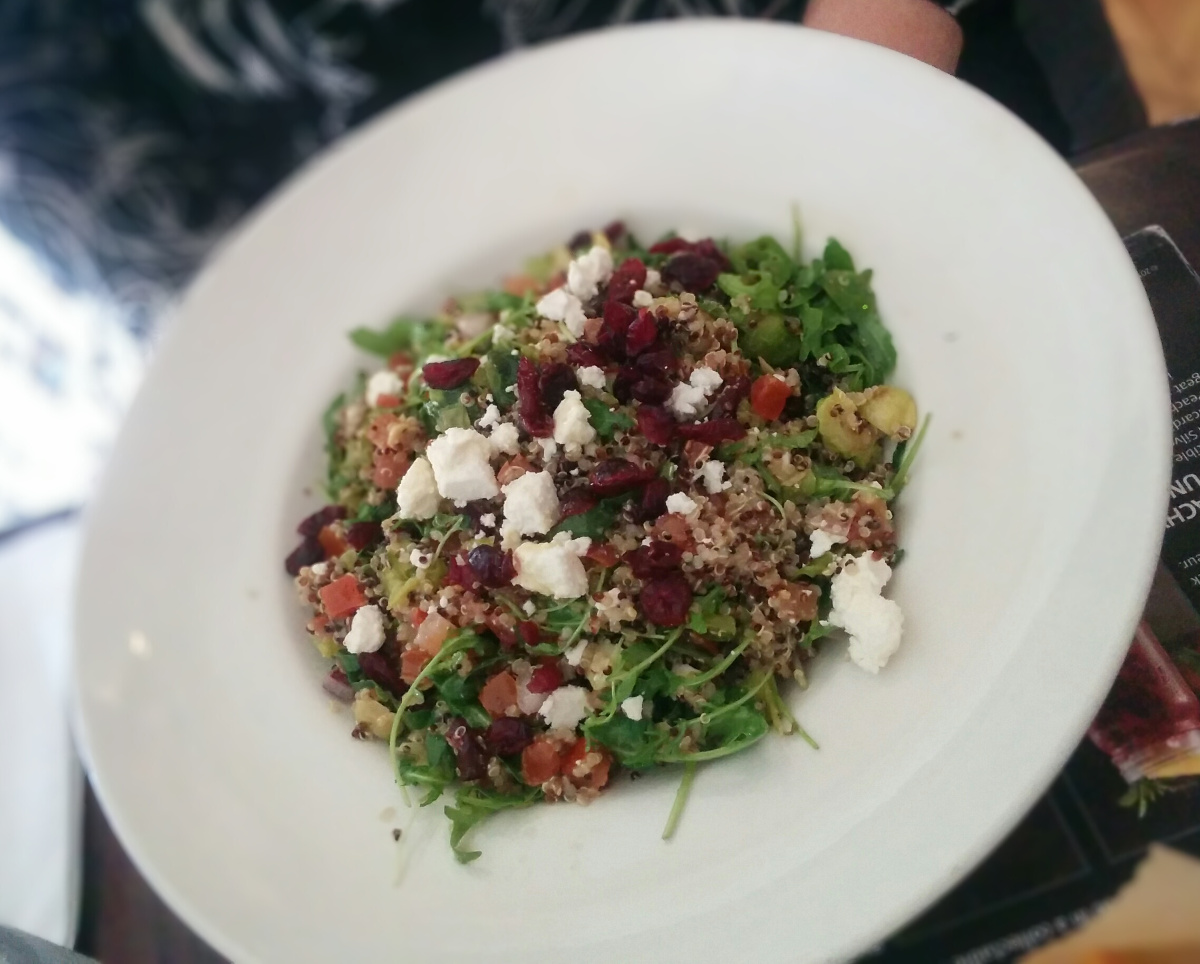 Our drinks were served pretty much immediately and we waited only for a reasonable amount of time for the food to be served, since it is freshly cooked in the rear kitchen.

In the meantime we enjoyed the music in the background, the coming and goings of the gondolas outside our window and the chit chatter of the waitresses, all young and super friendly, smiling all the time.

When the food arrived, the portions turned out to be quite generous, well-presented and quite flavoursome.

I was quite pleased with my â€œfakeâ€ burger, as I like to call it. It was full of flavours without being overwhelmed with sauce. The fries were perfect, not too salty and my cocktail was delicious.

I tried my friendâ€™s salad and it was quite nice, even though I do not think I would be able to eat such a large portion of salad in one go. Her non-alcoholic drink was quite refreshing and full of flavour!

Even though, as I explained earlier, I do love my meat, I truly enjoyed the new vegetarian menu offered by Hard Rock CafÃ© and I can truly recommend it, not only for non-meat eaters and vegans, but also for those wanting to change from the classic beef burger!